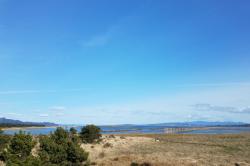 Launching from sandy beaches along the Columbia River you are likely to witness the passage of huge ocean freighters on the way to experience Trestle Bay (a.k.a. "Jetty Lagoon").

Trestel Bay was formed as a result of sand accumulation around the south jetty of the Columbia River, which itself was slowly constructed between 1885 to 1895. Paddling in these brackish bay waters you will see 1.5 intriguing miles of shallow sub-tidal and inter-tidal mudflats and inter-tidal marshes which are fun to explore.

In 1995, the Army Corp removed 500 foot section of Jetty stones eliminating an obstruction that had prevented the flushing of estuarine water between the bay and the river. Now reestablished as an integral part of the lower Columbia River estuarine ecosystem Trestle Bay offers better foraging habitat for many marine and estuarine fishes line juvenile salmon and trout, as well as shellfish.

*First* before paying online, reserve your date and time via this Intake Form or call *Phone Number* (503) 866-4808. See Weather Protocols and Info about re-scheduling and cancellations. No experience necessary for many tours. 48Hr or more typically required. Two (2) person minimum.